This week is Salt Awareness Week, with a focus on hidden salt in our foods.

Perhaps we’ve been looking the other way watching fat and carbs battle it out and we’ve forgotten about salt – yet another risk factor for us to be wary of, will we ever get a break?

Salt is worth a quick glance though – a study in The Lancet found excess sodium to be one of the biggest dietary risk factors globally. It is implicated in our biggest killers – Cardiovascular Disease and Cancer.

2.5 million people in the UK have been diagnosed with high blood pressure (hypertension) – but there are an awful lot of people floating around with hypertension who don’t know it.

What’s interesting/ worrying is that we’re underestimating our salt intake quite considerably. On average we’re consuming 8g/ day. The recommendation is 6g/ day but we think we’re consuming around 3g per day. Whoops!

Here’s the guide for all ages: 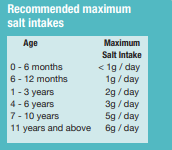 Some brands within the same category will vary considerably in salt content so always double check your store cupboard favs. 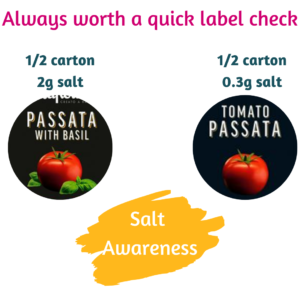 I would say Peppa Pig’s ideal viewer is aged 3. When my daughter was 3, Peppa Pig was our friend as I tried to feed her baby brother. But Peppa should really be for TV only as this tin gives nearly half of a 3-year olds salt intake for the day. 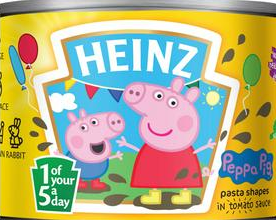 For some foods it’s really worth it though, for example ketchup, because it’s these sorts of extras that can really make it all add up. Reduced salt stock cubes are another good shout.

Other high salt foods and what to consider

Cheese – high in salt but a valuable source of other nutrients, especially for children so just go steady on portion size and you probably don’t need triple cheese topping on a pizza.

Sausages, bacon, salami other processed meats – choose reduced salt varieties when possible and defo those without nitrates when you can:

Smoked and unsmoked bacon tends to have same levels of salt.

Olives – they’re from The Mediterranean but they’re also quite salty.

Breakfast cereals – some can be higher in salt but do consider the bigger picture – how much fibre they’re giving you, the portion size you’re eating and the carrier nutrients that come from the milk/ yogurt you’re likely to be serving it with.

Pesto – fresh varieties have less salt. Some common brands have over 3g salt per 100g; not ideal especially if used as a staple in your children’s diet. Lower salt alternatives would be tomato based sauces but do check the label.

Here’s the info to help with checking food labels in store. Traffic light labelling is useful so you’re not shopping for hours. 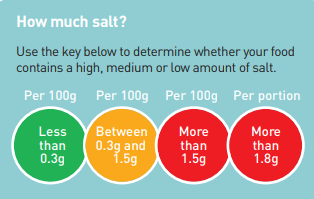 Laura ClarkMarch 12th, 2020|Tags: how to eat less salt, how to reduce my salt intake, tips to reduce salt, what salt is in my food|

Award winning lifestyle blogger and vlogger Honest Mum asked Laura to write a regular feature for her following their meeting at a well-being event. Factual, entertaining and always from the heart, here are some popular posts:

Other social media features include supporting lifestyle bloggers with #smallchanges they could make for a healthier 2016, and helping buzzfeed journalist Chelsey Pippin understand the real sense behind the #sugarfree craze: